The Glorkian Warrior Delivers A Pizza

The Glorkian Warrior isn't the brightest bulb in the box, so it's good he's got his trusty talking backpack to advise him as they set out on a perilous journey to deliver a pizza. The pizza's got clams and peanut butter on it, so it's not clear who's going to want it, but deliver it they will. With bright, lively illustrations and classic pratfalls, this graphic novel for kids is 112 pages of super icky gross-out humor and ludicrously bad decisions? in other words, The Glorkian Warrior Delivers a Pizza is a winner.

James Kochalka is the first Cartoonist Laureate of Vermont. He's the author and illustrator of several popular children's book series, but he's also won the Harvey Award and four Ignatz Awards for his books for adults. The Glorkian Warrior Delivers a Pizza is his first book with a traditional publisher. Tom Angleberger is the author of the bestselling "Origami Yoda" series. He is also the author of Horton Halfpott and Fake Mustache, both Edgar Award nominees, and The Qwikpick Papers: Poop Fountain! Here, they chat about blowing minds, monsters, and magic robots. 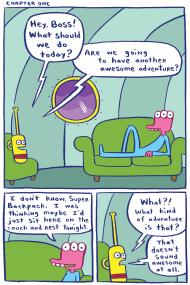 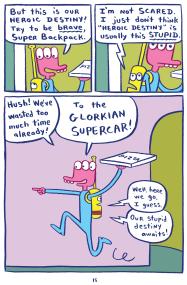 I like authors who are capable of blowing kids' minds and aren't afraid to do it. Did you have that amazing ending in sight when you started?

Honestly, it kind of blew my own mind too! It turned my light-hearted adventure into actual science fiction, which I thought was pretty cool. I definitely didn't know how it was going to end when I began scripting... but somewhere along the way I figured it out. Actually... near the end, when the Magic Robot pointed out the Glorkian Warrior's mistake, that was the first I knew about it. And then as I drafted the final chapters, I pieced together the reasons why. What's really great about the ending is that it will totally change your reading experience of the beginning if you go back and read the book a second time.

The biggest knock I've received so far was from myself. .. after finishing the final draft, I read the book to myself and was actually kinda overwhelmed and embarrassed by how relentlessly stupid the story is. When I first submitted it to First Second, the publisher brought the draft home to read to his kids. The kids declared it the "stupidest book ever written," but they absolutely loved it. I guess it's the kind of stupid kids like. Which makes sense because I drew the whole thing as a bedtime story to entertain my own sons.

What did you read as a kid that blew your mind?

The Bad Island by William Steig definitely blew my mind. It's like non-stop constantly escalating monster destruction. And in the end EVERYBODY DIES! It's since been republished as The Rotten Island... and the language has been altered a bit since the first edition. Almost all of Steig's books are more intense than your standard children's book, but this one in particular used complicated language and especially wild imagery. It has the best monsters ever drawn, for sure.

Will there be a Return of the Glorkian?

Oh yeah! I'm well into book two, but I haven't chosen a title yet. By the time The Glorkian Warrior Delivers a Pizza actually comes out I will already be finished drawing book two. It's probably even stupider than book one and will have an even more ridiculous ending. 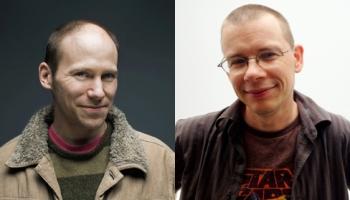