By age sixteen, Rhine Ellery has four years left to live. She can thank modern science for this genetic time bomb. A botched effort to create a perfect race has left all males with a lifespan of 25 years, and females with a lifespan of 20 years. Geneticists are seeking a miracle antidote to restore the human race, desperate orphans crowd the population, crime and poverty have skyrocketed, and young girls are being kidnapped and sold as polygamous brides to bear more children.

When Rhine is kidnapped and sold as a bride, she vows to do all she can to escape. Her husband, Linden, is hopelessly in love with her, and Rhine cant bring herself to hate him as much as shed like to. He opens her to a magical world of wealth and illusion she never thought existed, and it almost makes it possible to ignore the clock ticking away her short life. But Rhine quickly learns that not everything in her new husbands strange world is what it seems. Her father-in-law, an eccentric doctor bent on finding the antidote, is hoarding corpses in the basement. Her fellow sister wives are to be trusted one day and feared the next, and Rhine is desperate to communicate to her twin brother that she is safe and alive. Will Rhine be able to escape--before her time runs out?

Together with one of Linden's servants, Gabriel, Rhine attempts to escape just before her seventeenth birthday. But in a world that continues to spiral into anarchy, is there any hope for freedom? 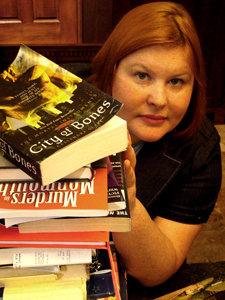 Lauren DeStefanos new book, Wither, heralds the coming of a promising new voice in young adult dystopian fiction. Wither introduces us to Rhine Ellery, age sixteen, who lives in a world decimated by the results of genetic engineering. In an attempt to render humanity almost immortal and disease-free, scientists accidentally introduced into human DNA a ticking time bomb all women live only to age twenty and men to age twenty-five. In this world, riddled with brutality and stricken with poverty, girls are married off as young as thirteen and forced to bear children in a desperate attempt to keep humanity ahead of the wave of disease that threatens to eradicate them.

Lately readers have been seeing an influx of books handling new and old topics in a different, more female-centric way. Part parable, part warning, Wither puts women and girls at the heart of a dystopian tale mixing progress and disempowerment, science and secrecy. After being kidnapped from the home she shares with her twin brother, Rhine is "sold" to a rich man, Linden, along with two other girls, Cecily and Jenna. Their polygamous marriage is seen as necessary, for Lindens father is a scientist trying to find a cure for the "virus" that strikes down youth, and he needs new subjects for his experiments subjects in whose DNA, he hopes, a cure can be found.

The day-to-day lives of Rhine and her sister-wives parties, pregnancy, babies contrasts starkly with the shadow of death that looms over every action. Even Rhines growing romance with a servant, Gabriel, could lead to vicious punishment for them both as could her repeated attempts to escape her gilded prison. This story, the first of a trilogy, leaves us with a glimmer of hope but no easy answers.