The Man Who Planted Trees: A Story Of Lost Groves, The Science Of Trees, And A Plan To Save The Planet

The Man Who Planted Trees is the inspiring story of David Milarchs quest to clone the biggest trees on the planet in order to save our forests and ecosystemas well as a hopeful lesson about how each of us has the ability to make a difference.

When is the best time to plant a tree? Twenty years ago. The second best time? Today.Chinese proverb

Twenty years ago, David Milarch, a northern Michigan nurseryman with a penchant for hard living, had a vision: angels came to tell him that the earth was in trouble. Its trees were dying, and without them, human life was in jeopardy. The solution, they told him, was to clone the champion trees of the worldthe largest, the hardiest, the ones that had survived millennia and were most resilient to climate changeand create a kind of Noahs ark of tree genetics. Without knowing if the message had any basis in science, or why hed been chosen for this task, Milarch began his mission of cloning the worlds great trees. Many scientists and tree experts told him it couldnt be done, but, twenty years later, his team has successfully cloned some of the worlds oldest treesamong them giant redwoods and sequoias. They have also grown seedlings from the oldest tree in the world, the bristlecone pine Methuselah.

When New York Times journalist Jim Robbins came upon Milarchs story, he was fascinated but had his doubts. Yet over several years, listening to Milarch and talking to scientists, he came to realize that there is so much we do not yet know about trees: how they die, how they communicate, the myriad crucial ways they filter water and air and otherwise support life on Earth. It became clear that as the planet changes, trees and forest are essential to assuring its survival.

Praise for The Man Who Planted Trees

This is a story of miracles and obsession and love and survival. Told with Jim Robbinss signature clarity and eye for telling detail, The Man Who Planted Trees is also the most hopeful book Ive read in years. I kept thinking of the end of Saint Franciss wonderful prayer, And may God bless you with enough foolishness to believe that you can make a difference in the world, so that you can do what others claim cannot be done. Alexandra Fuller, author of Dont Lets Go to the Dogs Tonight

Absorbing, eloquent, and loving . . . While Robbinss tone is urgent, it doesnt compromise his crystal-clear science. . . . Even the smallest details here are fascinating.Dominique Browning, The New York Times Book Review

The great poet W. S. Merwin once wrote, On the last day of the world I would want to plant a tree. Its good to see, in this lovely volume, that some folks are getting a head start!Bill McKibben, author of Eaarth: Making a Life on a Tough New Planet

Inspiring . . . Robbins lucidly summarizes the importance and value of trees to planet Earth and all humanity.The Ecologist

Imagine a world without trees, writes journalist Jim Robbins. Its nearly impossible after reading The Man Who Planted Trees, in which Robbins weaves science and spirituality as he explores the bounty these plants offer the planet.Audubon

An Interview with the Author 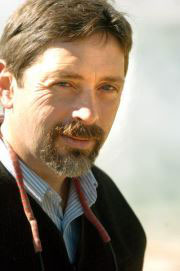 Q: How did you meet David Milarch, who is featured in this book?
A: In 2001 I wrote a story for the New York Times on Milarchs plan to make copies, or clones, of some of the biggest trees in the country the champions. By clones I mean he would take cuttings and root them, the way trees have been copied for centuries. That way, he reasoned, if one of the champions should die, its genetics would live on, since there would be hundreds of genetically identical copies planted in what he called living archival libraries. Not much is known about tree genetics, and so this was a way of preserving champion tree DNA until it could be studied. It was an intriguing idea.

Then, after the story came out, I met Milarch in person and he told me the idea to clone these big trees came to him after he had a Near Death Experience that is, he had died and returned to his body. I was shocked I had never heard of such a thing. He told me that he was deeply inspired to clone the trees by spirit beings he met during and after his experience.

I didnt know what to think of his story, but all of the scientists I spoke with about his plan to clone trees thought it was spot on, a smart idea.

Q: Why did you feel his was an important story to tell?
A: Scientists cant say that trees are in trouble there isnt enough data. But privately they think that many trees and forests are in trouble and things will get worse as the climate warms, perhaps much worse. But Milarch can say trees are in trouble from his unique perspective. So his tale became an important and intriguing way to tell this story. And its all backed up with interviews with scientists.

Q. What happened to your own forest?
A few years after I met Milarch the entire 15 acre forest of trees around my house in Montana started dying, and some of the trees were 300 and 400 years old. And they kept dying until they nearly all disappeared, not only on my property, but across swaths of Montana, and across much of the Rocky Mountain West. And its far worse in Canada. The beetles that kill trees are thriving because its getting much warmer.

It may happen even sooner. Look whats happening to the weather this year temperatures are warmer all over the US, and meteorologists say they havent seen anything like it.

Telling Milarchs tale and the story of dying trees became even more urgent after I saw the forest die-off in the West, and in my own backyard.

Q. What is Milarchs plan for these giants he is cloning?
A. He hopes someday that people will plant one clone of these champions in the midst of hundreds of other regular trees as a way of beefing up the genetics of forests.

Q Why are trees important?
Milarch has often said that trees are more important than we know. And as I talked to scientists and read papers they confirmed that notion: we have underestimated the trees, vastly. They are a kind of eco-technology that sustains our lives here on the planet and that humans cant duplicate. There is a whole range of ecosystem services provided by trees and forests that many people dont know about. They filter our water and can clean up the nastiest kinds of toxic wastes. They soak up greenhouse gasses to mitigate climate change, protect us from harsh UV rays, and are a heat shield and natural air-conditioner for cities and suburbs. David Milarch talks about them as the filters of the planet. As we all know, when you take the filter out of your aquarium, the fish die.

Q: What can we do?
As Milarch says, trace back almost every environmental problem far enough and the solution is to plant trees. Trees are hope. But you cant plant them just anywhere. Its about strategically planting trees -- the right tree in the right place for the right reasons. The big question we need to figure out is what is the right tree to plant and where.

A Look Inside The Man Who Planted Trees